Easter eggs have been part of a long standing tradition of hidden secrets and quirks buried in software, particularly video games. On this day of Easter, let's do a little Easter Egg hunting in the original King's Quest. The items shown in this article are mostly about quirks, glitches, and errors that have been discovered which result in some amusing and/or interesting results.

One of the things which provides replayability in King's Quest 1 are the multiple options to solve problems. There is often an ideal (generally a more pacifist route) way to conquer certain challenges, but there are also more violent methods, as well. The dagger is intended to cut the well's rope so Graham can obtain the bucket. However, it is possible to kill either the dragon or the goat with the dagger, as well.

If you lack a conscience and are willing to incur the wrath of the ASPCA by killing the goat, you can earn back a few karma points by showing the carrot to the dead goat, who will miraculously resurrect (just like Jesus did on the third day).

Speaking of Jesus, Sir Graham is not the messiah (especially if he goes about killing defenseless goats), but they both can walk on water. If you go to the screen with the mushroom, move Graham so his feet are about one pixel below the bottom of the screen and then walk to the east. If you line Graham up just right, he can "walk" across the river without drowning.

Walking across water is just one of Sir Graham's many talents. He can also walk through stone walls! This is a bizarre bug I found many years ago. Just before leaving the Leprechauns' kingdom, have Graham duck, eat the magic mushroom, and then finally stand, which will revert Graham's sprite back to the normal view instead of mini-Graham. With the game thinking that you are still mini-Graham, you can walk through the wall to the west.

The above demonstration is not actually in the original King's Quest per se, but the lines about the medieval flamethrower were left over lines still left in the source code, as pointed out by The Cutting Room Floor. The screenshot below shows the messages for Room 53, the king's throne room, which includes a couple of unused messages. 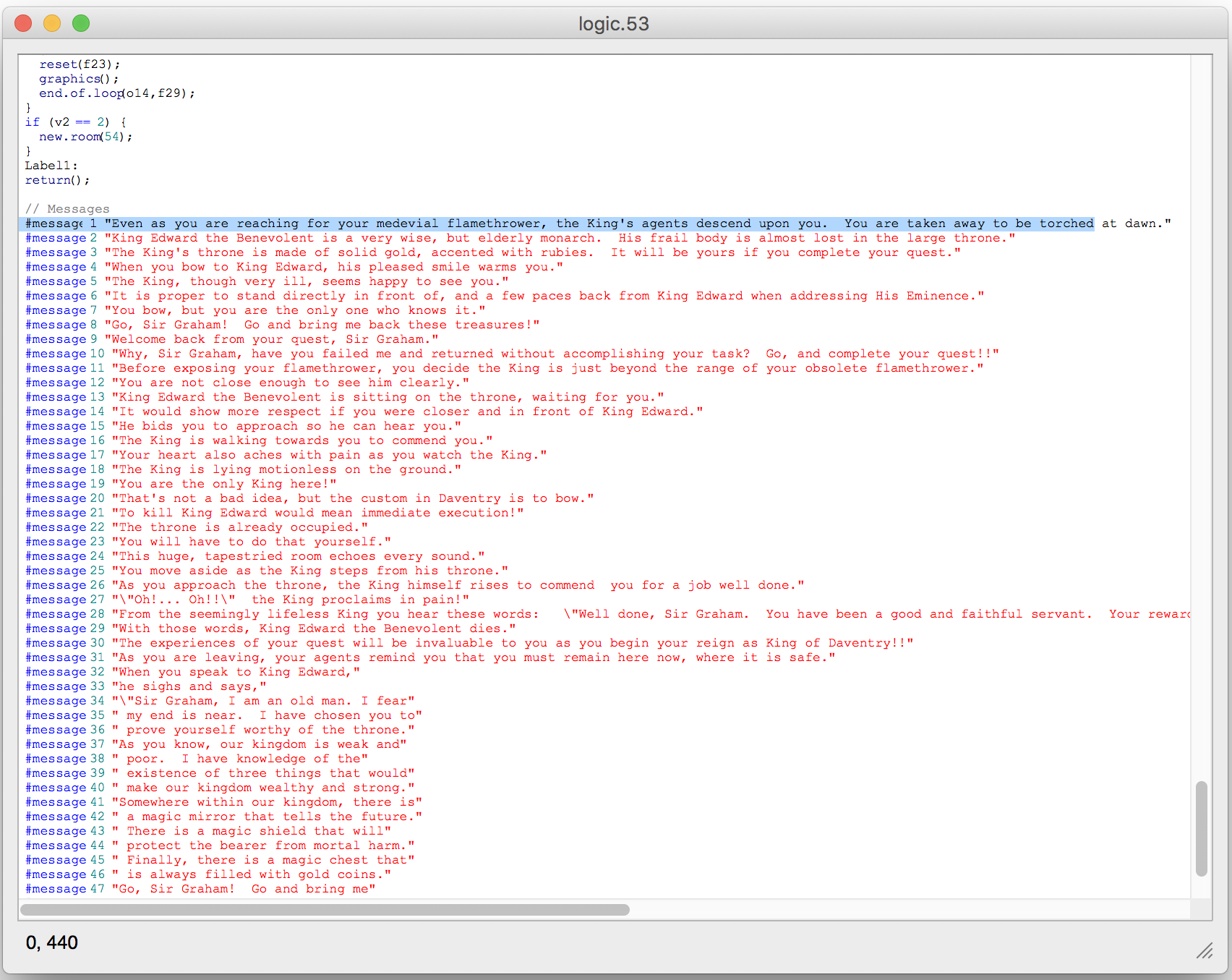 Figuring out the name of the gnome (ifnkovhgroghprm) in this game, was probably the most notorious of all of the puzzles (which was even poked at in the 2015 King's Quest game), but there was one other name which was added as a joke, a reference to the era in which this game was made. If you guess the name Mikel Knight, the gnome will respond, asking if you think he is a car. This is a not-so-subtle reference to Michael Knight, the main character of the TV show Knight Rider which aired from 1982-1986. 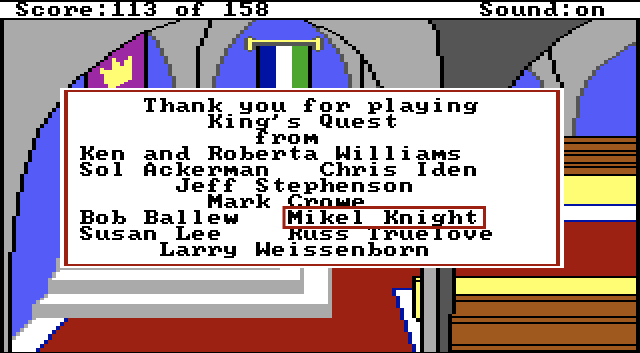 The name Mikel Knight makes one additional appearance in the end credits of the game, which initially made it appear that one of the developers was named Mikel Knight, but according to The Sierra Chest there was never a Sierra employee by that name. 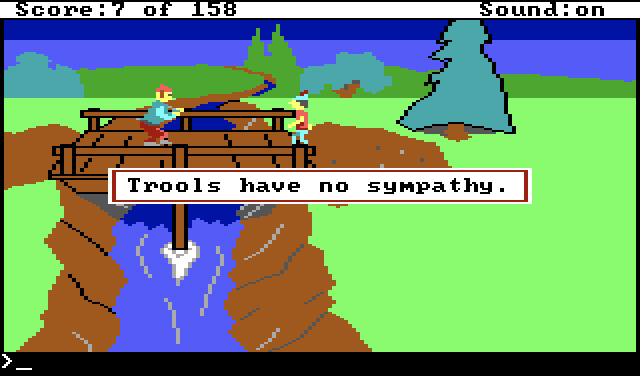 Sierra generally did an excellent job with proofreading 99.9999% of the time, but every once in a great while, a spelling error did manage to slip by. If you type beg troll at the east bridge leading to the gnome's island, the returned message says Trools have no sympathy. 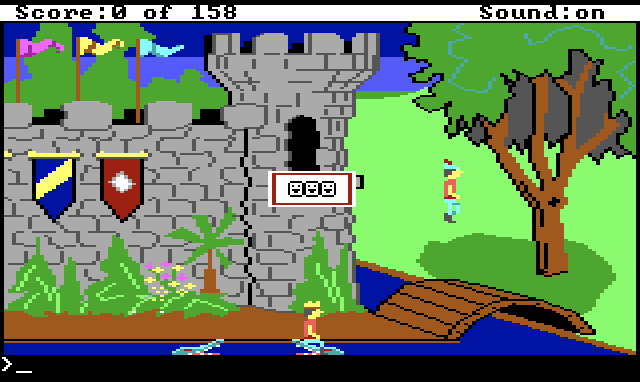 In this screenshot, Sir Graham watches as his doppelgänger King Graham rides an alligator. To reproduce this glitch, you will need to go into debug mode in the game, add the 26th object, which is water, but that object only appears in the game when you fill the water bucket, so when you try and "look" at the water without having the bucket, it creates this glitch. 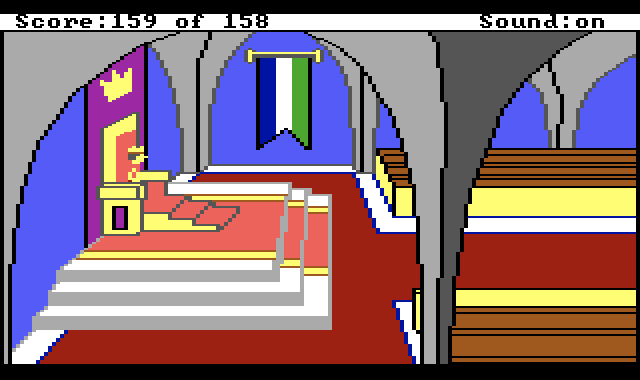 13 July 2019 Update: The maximum score in King's Quest 1 is 158 points, but there are two methods to be able to exceed this score. I reviewed a list of all of the possible points in KQ1 and if you do everything properly, you can get a score of 159 points. From a points list I found in an earlier edition of the King's Quest Companion, it appears that some points regarding the magic bowl had been changed over time, which results in a couple scoring oddities. If you want to get all of the possible points, here are a couple of easy to miss points: 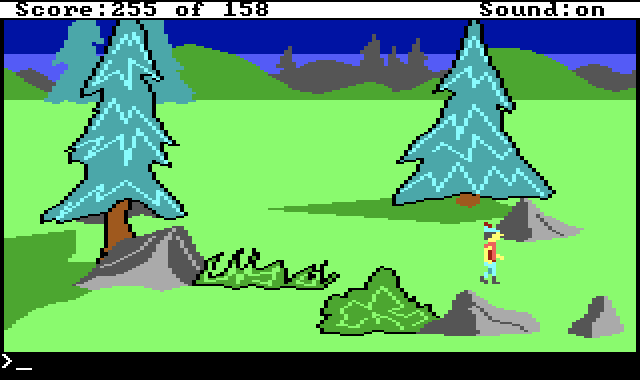 While inspecting the source code of King's Quest 1, I came across something I had never seen before. If you read the word on the bottom of the bowl, it will give you a single point, but if you then try and fill the bowl with stew, it doesn't give any additional points. Filling the bowl normally gives you two points. But if you eat the stew, it takes away two points, so if you perform the following steps properly, this will result in a net of -1 points.

If you repeat this enough times, the score will not become -1, but it will instead roll over to 255. The score is stored as an unsigned 8-bit integer, so none of the AGI games has a maximum score of more than 255. Instead of the score becoming a negative number, it will roll over to its maximum value (similar idea if an odometer could turn backwards).