Just three weeks since the last release, Permanent Eraser 2.9.0 has been released which focuses on several refinements and improvements for the app on macOS Mojave and Catalina. These resolved issues were discovered during the initial development of 2.9.0 (and subsequent development of 2.8.1). However, several of these issues (such as properly refreshing the progress indicator and preventing the "cannot check for malicious software" Gatekeeper warning on Catalina) required bumping up the minimum system requirements of the app which resulted in Permanent Eraser finally dropping support for PowerPC-based Macs.

For many years, I held off from dropping support for older computers and operating systems, especially since the primary function of Permanent Eraser is to securely erase files on mechanical hard drives, which are not so common these days. That was the primary reason that Apple removed Permanent Eraser from the Mac App Store, because this "could" cause harm to a person's computer, even though Permanent Eraser checks if a file is on an SSD, and if so, only erases the file once. However, changes in macOS Mojave and Catalina finally forced Permanent Eraser to upgrade a bit and drop support for PowerPC, 32-bit Intel (the earliest line of Intel-based Macs), and Mac OS X 10.5 Leopard. 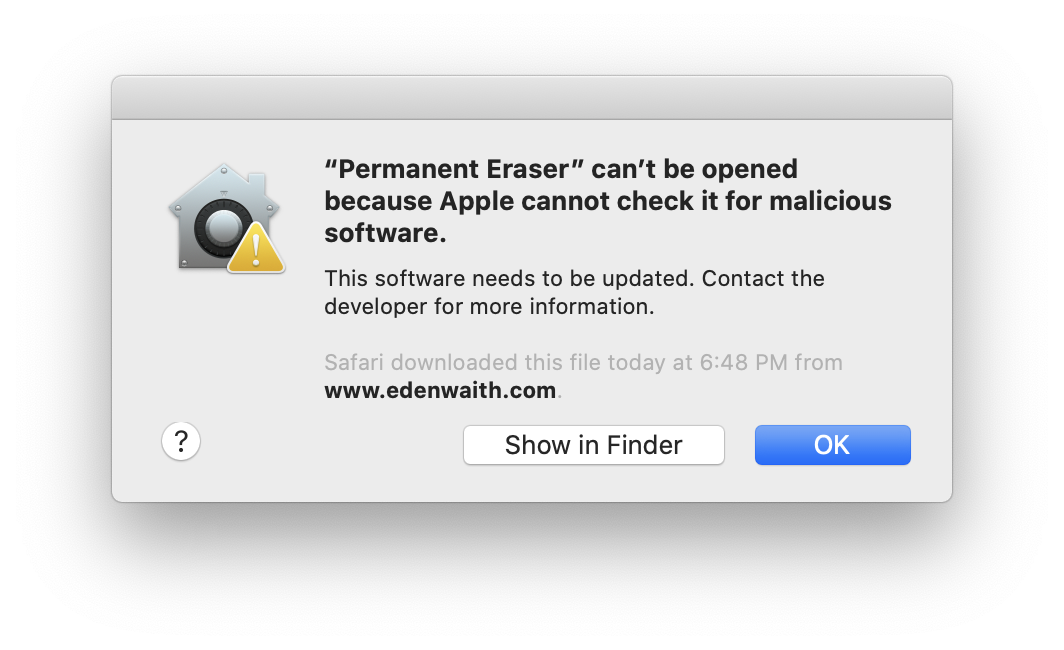 Fifteen years ago we saw Apple begin the process to migrate from PowerPC processors to Intel. We are seeing the same song and dance, and even a lot of the same actors, such as Rosetta, coming back onto the scene. Will Permanent Eraser run natively on Apple Silicon? For the current iteration of Permanent Eraser, the answer is likely 'no'. I would not be surprised if all Arm-based Macs going forward will only be equipped with SSDs, and if this does occur, then there is little reason for Permanent Eraser 2 to support these particular Macs. However, Permanent Eraser 3 will likely support Intel and Arm-based Macs.

I did a little preliminary testing of Permanent Eraser 2.9.0 on the first beta of the next version of macOS: Big Sur. As should be expected with any beta, it has its rough edges, and I encountered a couple of areas which did not look correct.

Considering there could be some potential issues with Permanent Eraser and macOS Big Sur, a patch release could still be in the future before Permanent Eraser 3 is released. But for now, Permanent Eraser 2.9.0 address the most egregious of issues encountered with macOS Mojave and Catalina.

Permanent Eraser 2.9.1 has been released to address an occasional crash which could occur when erasing the Trash on macOS Mojave.