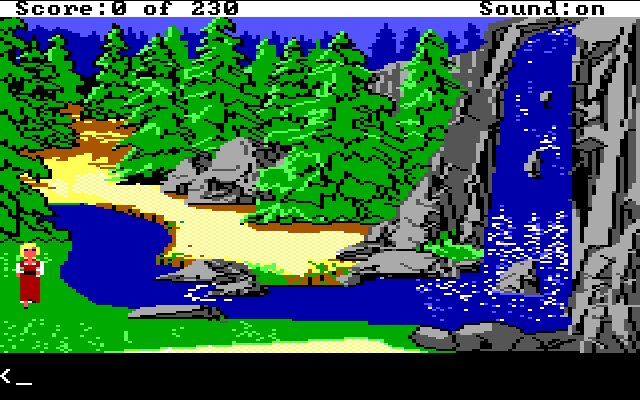 One thing which makes King's Quest IV unique is that it was the only Sierra game which was simultaneously developed for two different game engines: AGI and SCI. The version most people have played is the SCI version, which featured advancements such as higher graphics resolution and sound card support. This is also the version which comes with KQ collections. The AGI version was intended for computers which wouldn't be able to take full advantage of the new features in the SCI version, plus it was provided as the base to port to older systems like the Apple IIGS and Atari ST. The only way to play the AGI version of KQ4 is to do some searching on the internet or procure a very rare boxed copy.

Like nearly all games of this era, KQ4 came on multiple floppy disks. The AGI version came on three 3.5" 720K disks, whereas the SCI version required four 3.5" disks. If I was playing this game on a Tandy in 1988, I would be doing disk swapping as Rosella moved throughout the land of Tamir, but with modern computers, the preferred method is to emulate installing the game onto a hard drive. Using DOSBox to install a game from a CD is not overly complex, but trying to install from multiple floppy disks involves more work. This blog details the process to install King's Quest IV (or another multi-floppy disk DOS game) onto a Mac.

To start, I used Disk Utility to create the disk images, but they are saved out as dmg instead of img. To convert the disk images to be useful to DOSBox, I used the following commands from the Terminal:

Once I had created disk images for all three floppy disks for the AGI version of King's Quest IV, I then tried the following command in DOSBox 0.74-3 to mount all three disk images:

It looks like I am not the only person who has encountered this issue. Older versions of DOSBox supported this functionality to mount multiple disk images, but it appears this feature hasn't been reintroduced back in the past decade. Since mounting multiple floppy disk images wasn't working, I tried an alternate approach by converting the DMG files to ISO images.

For some odd reason, hdiutil appends a cdr file extension to each of the ISO files, but a simple rename is all that is needed to finish creating the ISO files. Next up I tried to mount the series of ISO files.

Stymied by DOSBox's lack of cooporation, I tried DOSBox-X, a derivation of DOSBox, which is very similar to its parent project, but contains extra features and support for more than just DOS games. I then tried IMGMOUNT to mount multiple floppy disk images, and it worked! With the floppy disks now mounted under the a: drive, I switched over to that drive and ran INSTALLH.BAT to begin the installation process. When prompted, I used the Swap menu in DOSBox-X to change out the virtual floppy disks. If this process had worked properly under DOSBox, I would have used the keyboard shortcut CTRL+F4 to switch between the various disks.

With King's Quest IV now installed, I could use tools like DOSBox or ScummVM to launch and play the game.