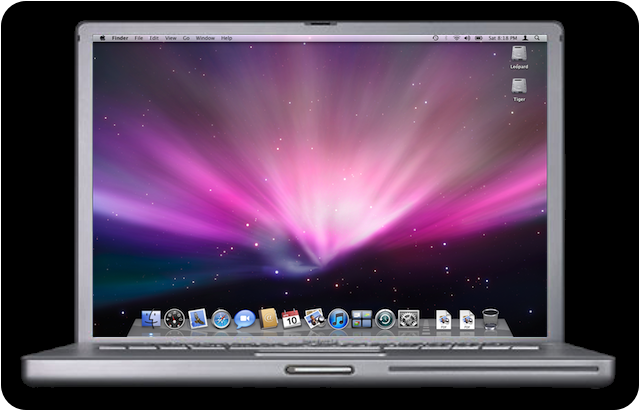 It has been recently announced that the venerable TenFourFox web browser for PowerPC (PPC) Macs was going to cease regular development, which rekindled my interest in playing around with my trusty PowerBook G4, which only gets occasional use if I'm testing a PowerPC version of some of my own software. Such is the way of aging hardware and software: the necessity to support them wanes over time, but it does question how useful can an 18 year old laptop be in 2021. Can it still be useful, or is it relegated to a hobbyist's endeavors?

With the retirement of TenFourFox (and its companion Classilla), I learned about another modernized web browser for PowerPC Macs: Leopard Webkit. TenFourFox is an amazing and much appreciated project to try and bring a modern web browser to PPC systems, but it runs very sluggishly on my PowerBook. Leopard WebKit, however, runs very quickly in comparison and makes browsing the web on a Mac from 2003 feel viable. Leopard WebKit also comes with a number of scripts to help modernize Mac OS X Leopard, including downloading QuickTime 7.7 (my version was slightly older at 7.6.9).

However, TenFourFox has been leveraged to be even more useful with various extensions, add-ons, tips and tricks. FoxBox is useful for for working with specific websites, especially YouTube. There are also a number of other tricks that can optimize the speed of TenFourFox to remove unnecessary overhead with modern web browsing.

One of the things that prevents a PowerPC Mac from being fully useful today is the same thing which hamstrung Classic Mac OS over time — the internet. Trying to keep up with the latest security is an eternal game of cat-and-mouse, and as older systems no longer get the latest security certificates and patches, it renders less and less network services available. Even on Mac OS X Snow Leopard, I can no longer work with GitHub, and a number of websites are not accessible.

When I look at the Docks on my PowerBook versus my modern iMac, I see many of the same or similar tools: web browsers, Xcode, an SCM utility (Cornerstone, but now Tower), a Terminal, Permanent Eraser, Transmit, DOSBox, Acorn, AGI Studio, BBEdit and TextWrangler. Revisiting this older system has been an interesting task to search for "new" software or just try to update things as much as possible and discovering a couple of interesting gems in the process.

But how useful is this software? For some tasks, they can easily do the job. I still have a license for BBEdit 8 and was able to get a copy of BBEdit 8.2.6 (which is what is currently being using to compose this blog post), Acorn 1.5.5 to create the poster image, and Transmit 5.1.9 to upload to the website. Even a couple of years ago, I used a similar combination of BBEdit Lite 6.1.2 and Transmit 1.7 on Mac OS 9 to update a blog entry.

[Update: 25 April 2021] I've recently been reading up on how to design fonts, and the book I'm reading mentions using Adobe InDesign to make the full use of OpenType fonts. InDesign is a program I haven't had much use for, but a number of years ago, Adobe did provide the full set of Creative Suite 2 products for free from their website after they shut down the activation servers for the these products. These are fairly mature products and can still be quite useful, as long as you have the proper hardware and operating system to run them. There are even active game developers still using Adobe Photoshop CS2 because it does everything they need, evidence that the latest doesn't always equate to the greatest for everyone.

Unfortunately, a cursory search shows that Adobe has taken down the original page which allowed one to download Acrobat 7 and the other CS2 products. Fortunately, there are other options such as using sites like the Wayback Machine, Macintosh Repository, and Macintosh Garden which still have backup copies of these software packages. If you have a PowerPC Mac and need to do some image editing, illustration, or layout design, these apps are still wonderful tools, great if you might need to use them only occasionally and don't want to pay the monthly "Adobe tax" for their Creative Cloud service.

It's been 20 years since the release of Mac OS X, and in many regards, the general usage of this operating system has not changed too much since its debut (certainly not as much as the jump from Mac OS 9 to X). We reached a useful level with our computers years ago as platforms have matured, and additional features have been mostly incremental improvements.

There have been some developers who have supported a platform well past the expected expiration date. Even a number of my own software products such as Permanent Eraser, EdenMath, 33 RPM, and EdenList for Mac (in addition to numerous retired projects) still work on PowerPC Macs. I've done my best to maintain support for PowerPC Macs for many years, but it certainly has become increasingly difficult to be able to support both older and newer systems. With the release of the Apple Silicon Macs, this is even more of a sign that support for PowerPC is only waning even further, and so will Intel Macs over time. And in another 15 years, perhaps we'll be migrating to yet another hardware architecture.

To answer the original question, can PowerPC Macs still be useful? It ultimately depends on what you are trying to do. If you are not heavily reliant upon network services, but have some old utility or game from the PowerPC-era, then they can still be feasible machines. But for modern day-to-day workhorses, they have already been put out to pasture.