Quest for Glory: Shadows of Darkness (QFG4) is no stranger to bugs. Errors 47 and 52 drive more fear into gamers' hearts than all of the undead creatures featured in this horror-infused game. The original version of the game had been rushed out far too early to meet the impending holiday deadline, which resulted in a very buggy game. I recently tried playing through the floppy disk version of QFG4 and got most of the way through until the game got stuck near the end upon returning to the Dark One's cave. The CD version of the game fixed a number of bugs, added some polish, and included the excellent voice acting, which makes the game feel barren without it.

Yet, even with these improvements, there remained a number of bugs, some which were only unearthed later as computers got faster. Many Sierra games from the early 90s were similarly afflicted by speed-related issues, which required utilities like Turbo or MoSlo to try and slow down the computer so the game would run properly. The indispensable NewRisingSun patch has been an incredible blessing to fix many of the most egregious issues in QFG4. When I first played this game, I encountered both Errors 47 and 52 within the first hour of game play. Fortunately, with the NRS patch, I haven't seen either of these errors for many years when I play the game under DOSBox.

Unfortunately, I have come across a random bug (that others have also noticed) when after fighting a wraith at its burial mound, the game would essentially lock up. One can see the drop down menu, but pretty much everything except the Settings menu is greyed out. In the margins of one of my maps I had scribbled down this note about this issue:

"When fighting wraiths, wait until it appears before fighting it. Otherwise, the game will freeze after the fight." 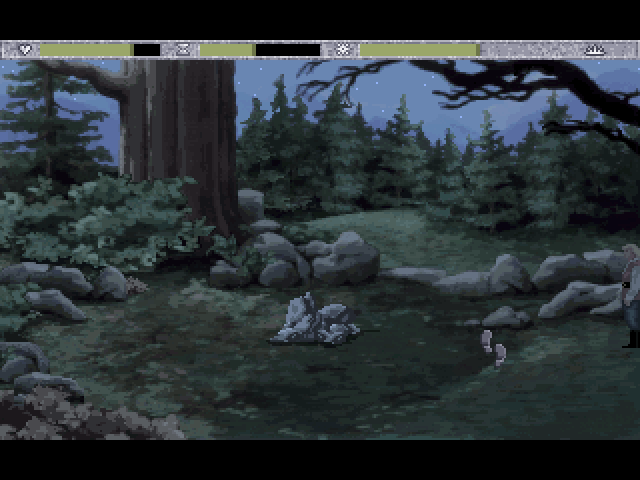 I found that this issue was somewhat random at times. Sometimes I would go into a screen with a wraith and have no problem triggering the wraith to appear. Other times the wraith would be a no-show. The key is to look for the red dot floating around the burial mound. If you don't see it immediately, then leave the screen and return at another time. But once the floating red dot is visible, approach the mound and wait until the wraith fully appears before initiating combat. 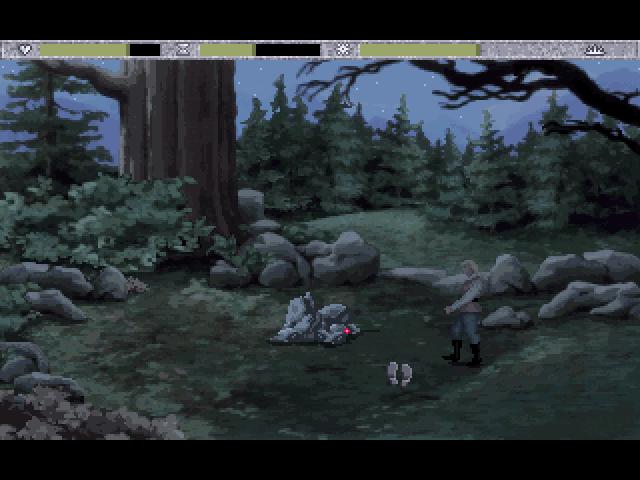 I never encountered this particular problem with the floppy disk version of QFG4, so this particular bug might be a side effect of the NRS patch. Another post recommends removing the wraith patch files 53.SCR and 53.HEP from the PATCHES folder. These patches fix the wraith draining health bug, but might also be causing this occasional issue, as well. A temporary work around is remove the two 53 files, fight the five wraiths at their burial mounds, then replace the two patch files. Otherwise, just return to the mounds if the wraith doesn't appear immediately.

And as always, check out Sierra Help for numerous other tips and patches to resolve various issues in Quest for Glory 4 and other Sierra games.