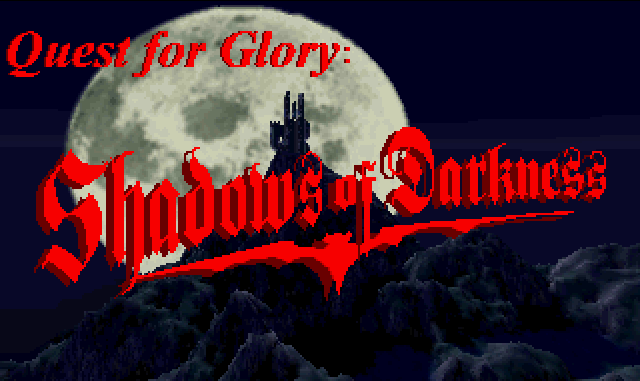 It's October, which means it is time to play some Quest for Glory: Shadows of Darkness! I've played this game numerous times over the past 25 years, and I still occasionally find new things, but this year I decided something different by playing both the floppy disk and CD versions of the game. This game was initially released in 1993, but it was rushed out to make the holiday season and was notoriously buggy. The CD version of the game followed a year later which included voice acting, in addition to many bug fixes.

I played through both the floppy disk and CD versions to look for differences between the two, in addition to various bugs (what is this — a bug hunt?). I was able to get through most of the floppy disk version, but when I returned to the Dark One's cave, it got stuck and acted like the hero kept trying to leave the cave instead of entering it. Unfortunate, but close enough for horseshoes and hand grenades to compare these two versions of Quest for Glory 4.

Going through these two versions of this game shows the importance of proper testing and how much effort goes into creating a game. While the floppy disk version was mostly playable until the end, it was interesting to come across areas which were buggy, missing animations, or were changed for the CD version. The update did clean up a number of issues, but even still there were a number of misses (such as missing or incorrect voice tracks). What wasn't expected several years after the game's release would be speed-related bugs that would plague many of the early 90s Sierra games. Fortunately modern utilities like DOSBox, ScummVM, and the NewRisingSun patch help immensely to curtail the worst of the issues and make this game a joy to experience over and over again.