Welcome back for another post about the Quest for Glory computer game series. This one will revisit Quest for Glory V: Dragon Fire, covering various releases, tidbits, and other interesting details (and less about fighting technical issues like last time I wrote about this game). 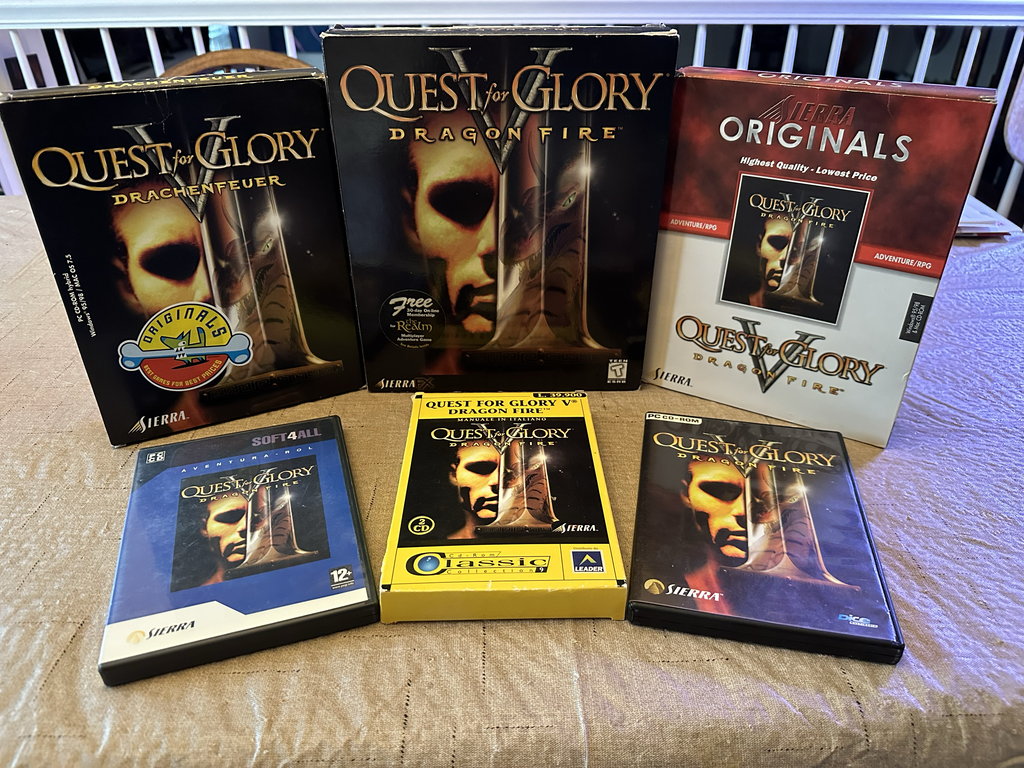 As evidenced in Stephen Emond's Sierra Collector's Quest volumes, there were many variants of Sierra products over the years. This collection is just a subset of what was released for Quest for Glory V:

Side note: I purchased the Polish QFG collection which has the "Hero's Blade" cover, but the CD only contains the first four QFG games, despite the cover being from the fifth game of the series. I initially thought that this was another variant of QFG5. When I looked at the system requirements (486 processor, 8MB of RAM, x2 CD-ROM), it tipped me off that this wasn't what I had originally expected. Stephen Emond's book about the Quest for Glory variants confirms that this is just the Polish version of the traditional QFG collection. I am not aware of any boxed collection which contained all five QFG games, since most of these collections were released in the mid-1990s, a few years before QFG5 was released in late 1998.

This is a game which takes a little more setup since it came out during that odd era of the late 90s (Windows 9x/Classic Mac OS), so it isn't as easy to play this game as those games which were developed with the SCI engine (thank you DOSBox and ScummVM). In my previous QFG5 post, I contemplated investigating Sheepshaver further, but instead I upgraded my PowerMac with new RAM, a better set of speakers, a new mouse, and an SSD drive.

My main workhorse for many years, which is able to run every version of Mac OS from version 9 through 10.4. When I initially purchased this computer in 2001, I was deciding between this and a G4 Cube. As stylish as the Cube is, I'm glad I ended up going with the PowerMac, which has had numerous upgrades, including a Zip drive and two larger hard drives. The expandability is a key reason it has survived so long.

After the multitude of problems I experienced five years ago, I needed to replace the bad RAM stick. It had been awhile since I'd purchased new RAM, and it looked like my old sources (RIP Ramseeker and 1-800-4-MEMORY) are no longer around. Fortunately, OWC had me covered for some new RAM. I certainly didn't need the extra RAM, but there is something satisfying about bumping the computer up from its original 64MB of RAM to 1.75GB of RAM.

Fortunately, replacing the RAM resolved the issues I experienced previously. There were only one or two crashes experienced throughout the game. I had a few cases where it initially looked like the game crashed, only to find that Mac OS 9 decided at that point to start indexing the hard drive. Ah, the joys before proper preemptive multitasking.

I splurged and bought a refurbished one of these monitors (from the now defunct PowerMax) when I was a poor university student, and it is still an amazing monitor. I even used it as a daily supplementary monitor until recently (had to convert from ADC to DVI to USB-C, but it worked). Prior to USB-C, ADC might have been the only single-cable option which could provide video, power, and USB through a single connection on a Mac. The power button on the monitor is also very handy, especially since I don't have a keyboard with a power button on it any longer.

This is the type of mouse I would have been using 20 years ago. I used the Logitech MouseWare driver software to switch the middle and right mouse buttons, so right-clicking would correspond to right-clicking in the game.

I saw the Harman Kardon SoundSticks IV at a Micro Center and initially thought this was some retro-style callback product from twenty years ago, only to discover that this was the fourth model of a continuing line of speakers. These were more modern and included Bluetooth, which did not interest me for my retro computer setup, but a standard 3.5mm line in would work just fine.

Years ago, I had some JBL Creature speakers, which sounded great until the satellite speakers died. I purchased a used set of these speakers, but the satellite speakers didn’t work. After a bit of research, I discovered that there's a known issue with the magnets coming loose. I even tried to find a fix, but it would be tricky in finding proper replacement speakers. I then looked at some Apple Pro Speakers. I fortunately did not find any, because my PowerMac is one year too old to power and run them effectively.

Since the other options weren't panning out, I took at look at the SoundSticks again, and discovered that the model III was still available for sale on Amazon, and at a much more reasonable price versus the IV's $299 price tag. The SoundSticks III look great, sound great, and made the magnificent QFG5 soundtrack soar.

I started using the model 1 about fourteen years ago, which also had the power button on it. This time around, I'm using the fourth generation, which also contains a keypad, very useful for combat in this game.

I purchased one of these to help future-proof this machine by being able to equip the PowerMac with an SSD drive in case any of the existing hard drives die. Mac OS 9 doesn't handle partitions larger than 80GB (or perhaps a little larger), but most new 3.5" hard drives tend to be in the 1TB+ range. I haven't installed it yet, I'll need to copy over the data from one of the other drives, but it will be interesting to see what type of speed increases I might see.

In preparation for this post, I took a number of screenshots from the PowerMac G4, and then copied the files over via a USB thumb drive to a modern Mac so I could convert the images to a more modern format.

While many things have changed over the last several decades, some things have remained the same. As it was with Mac OS 9 and even up to today, the keyboard shortcut to take a full screenshot is Shift-Command-3. The primary difference is that Mac OS 9 saved the image in the PICT format, whereas the modern macOS saves as a PNG. However, when moving the Mac OS 9 screenshots over to a modern version of macOS, there is no file extension and macOS Ventura doesn't recognize the file and assumes it to be a UNIX Executable File. Mac OS 9 identifies them as SimpleText files (since the program SimpleText is used to open those screenshots), but they are the older image PICT format. By just adding a .PICT extension, macOS can properly identify the files.

The next step was to convert the PICTs to a more web-friendly PNG format. Since there were a decent number of files to convert, I used a short script from the command line in macOS Ventura 13.0.1, which uses the zsh shell.

Running this command iterated over the directory of PICT files and created a PNG version of each image.

Other Oddities and Things of Note

After multiple playthroughs of a game, one finds little oddities and inconsistencies, as documented with the following screenshots:

When I completed the first Rite, I freed all five of the fishing villages. The primary goal is to be the first person to free their village and return with the town's sigil. If one is not fast enough, then Gort can win this Rite. An extremely odd thing happened this time around when I spent several days freeing all of the villages, the game claims that Magnum Opus also freed his village, which resulted in a three-way tie. 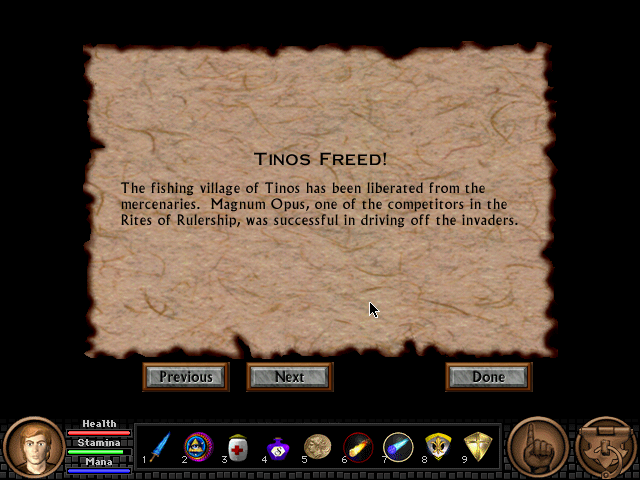 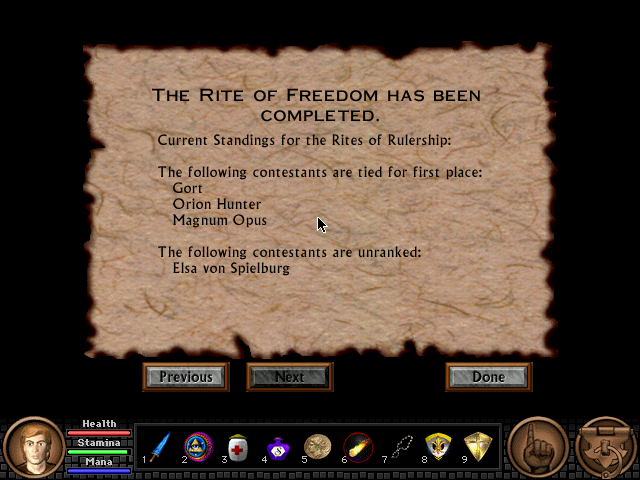 There are around twenty types of enemies to fight in the game, and some of them are a little more difficult to find, whether they are found only in certain locations or at night. The Weirdings I only found near the island of Delos, and they came with some great loot of Magical Chain Armor. The Salamander I don't ever recall finding before because I hadn't done too much swimming in the ocean besides near Silmaria. 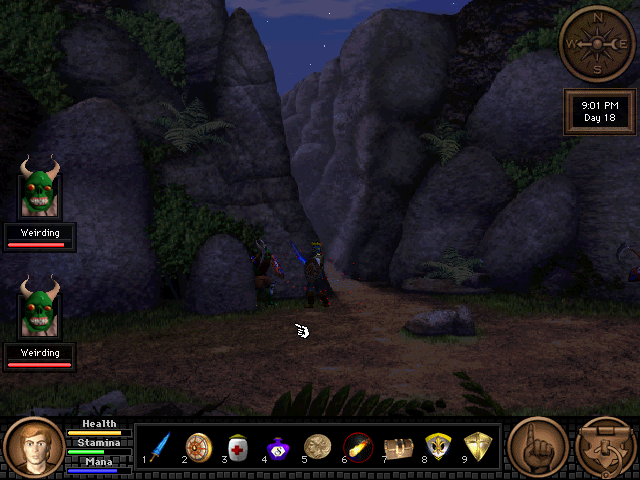 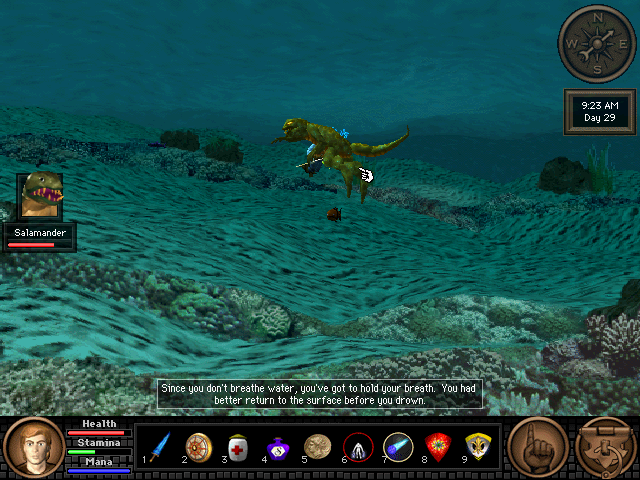 In the game, the (SPOILER) scientists poison several wizards with a tainted box of chocolates. However, there is a line where Shakra mentions that Erasmus was poisoned via his tea, which is inconsistent with the rest of the story. I'll assume that this was a change in the story, and that one line slipped through. Also notice how in this game, the rat's name is spelled as "Fenris", but in the previous QFG games, it was spelled as "Fenrus". 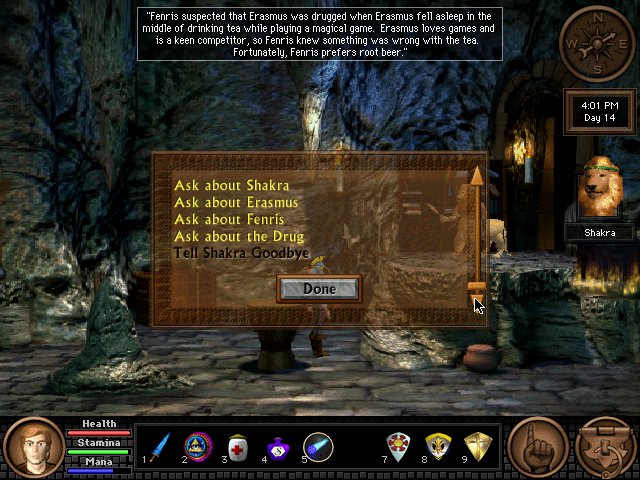 Speaking of spelling inconsistencies, another one appears in how to properly spell the name of the island Lymnos/Limnos. On the map, it is spelled "Lymnos", but the in-game dialogue and description spell it as "Limnos". 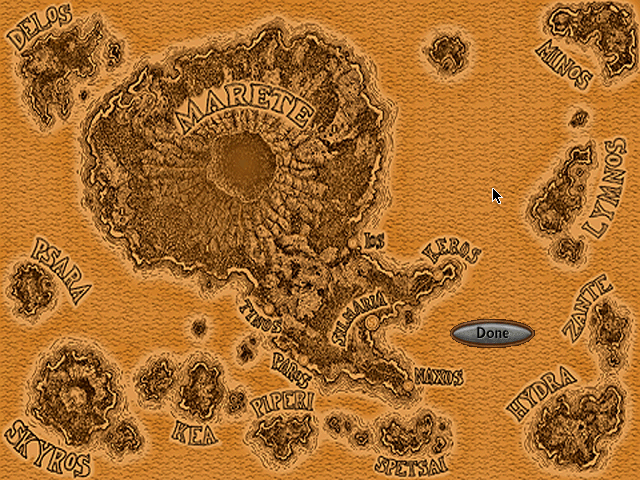 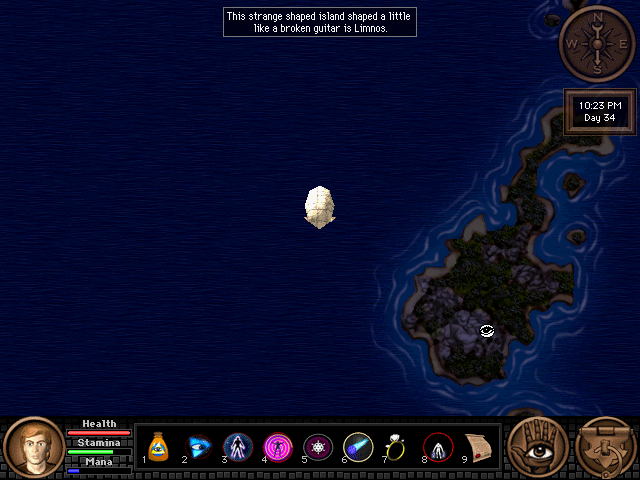 Quest for Glory 4 had numerous Edgar Allan Poe references, and while QFG5 does not contain the gothic atmosphere of the prior game, at least one more nod to Poe made it in. When looking at one of the underwater statues, there is a line which comes from the poem To Helen — To the glory that was Greece, And the grandeur that was Rome. 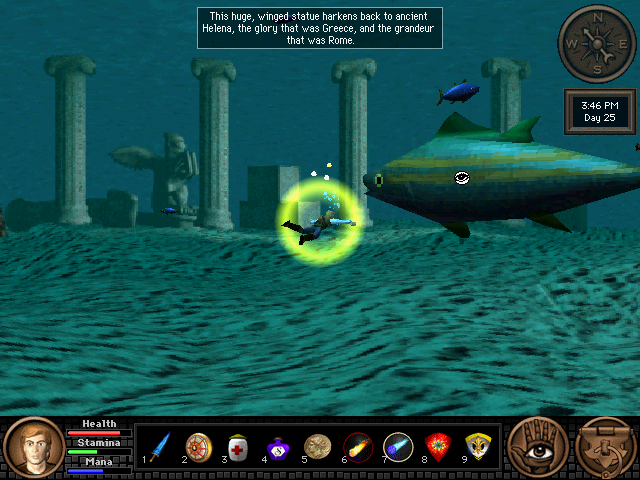 Neither Erana nor Katrina seem to appreciate it if the hero has been a little too friendly with Nawar. (Odd how they know, considering they don't leave their respective islands.) Elsa doesn't seem to care, though. 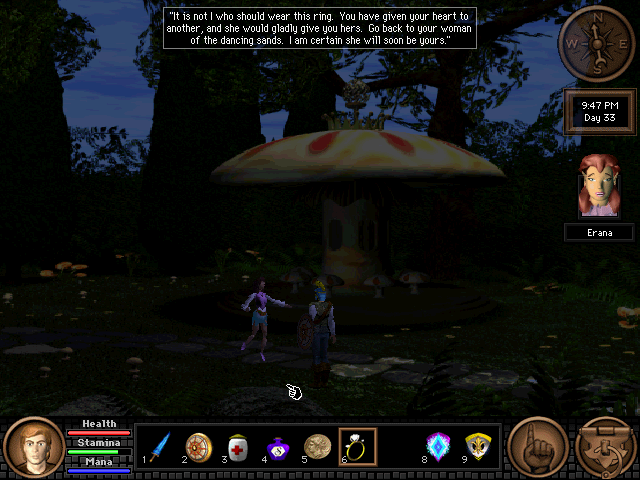 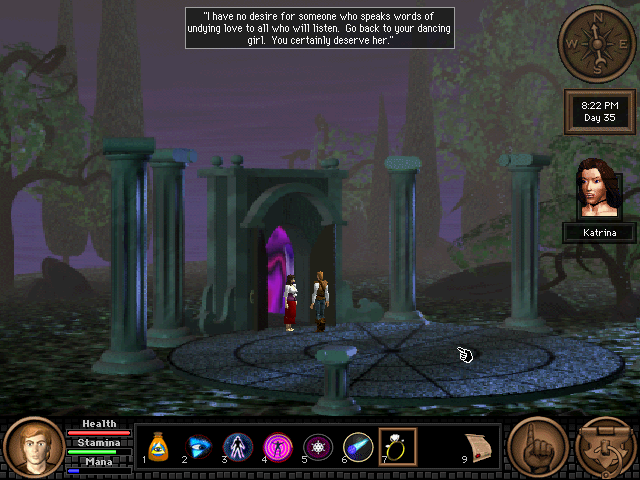 Quest for Glory games contain a lot of silly jokes and descriptions, and QFG5 does not have a shortage of those, whether it be an Alfred Hitchcock reference or some in-joke that might only make sense to the game developers. 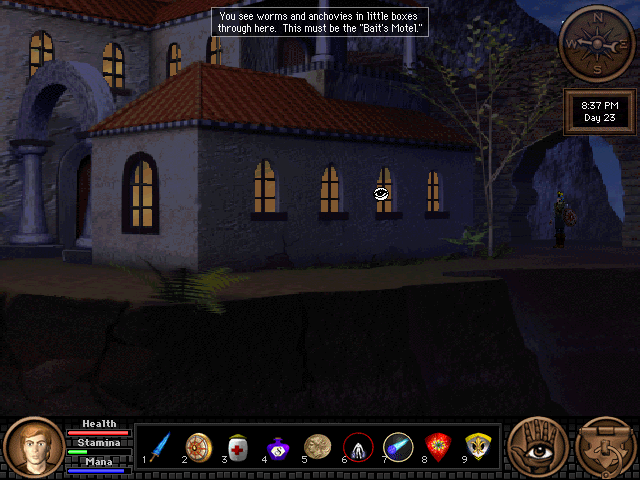 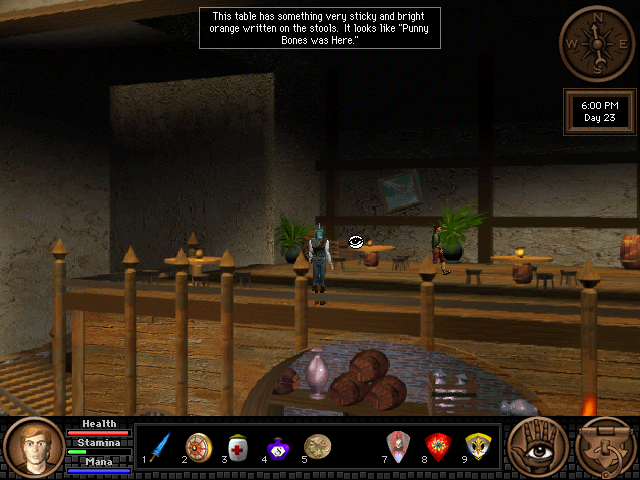 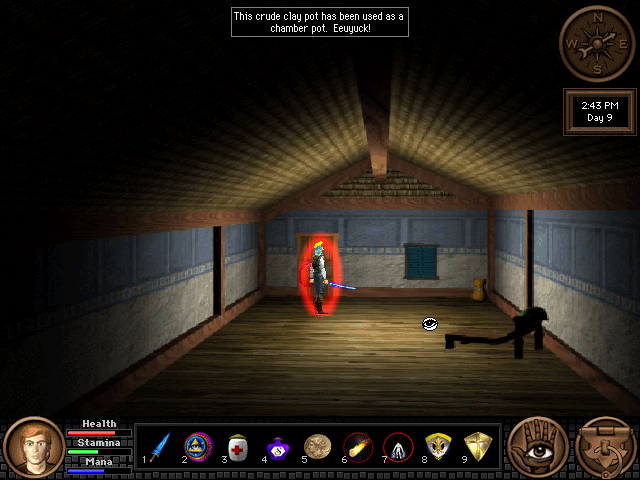 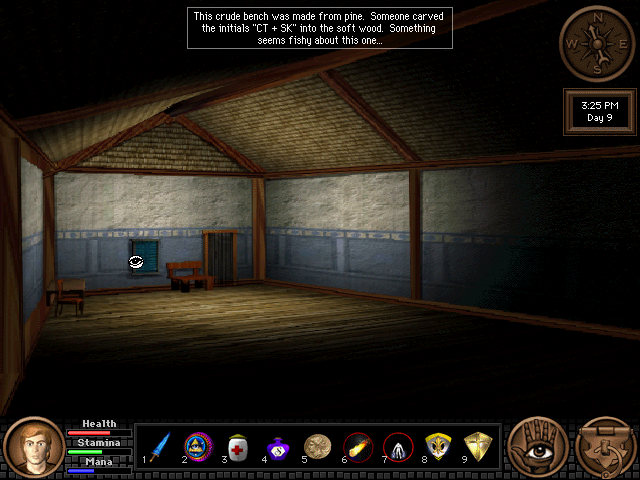 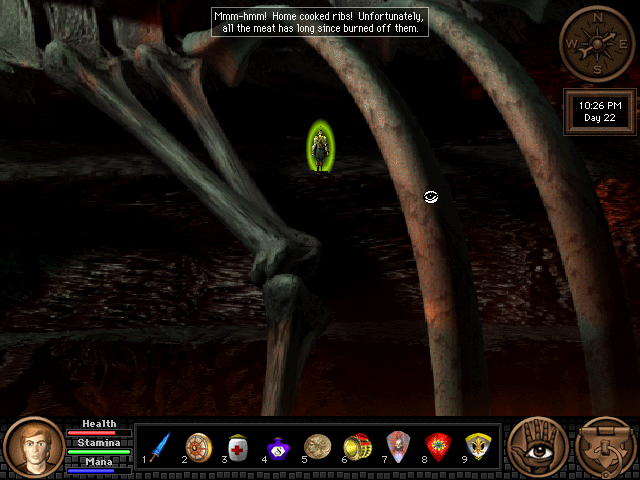 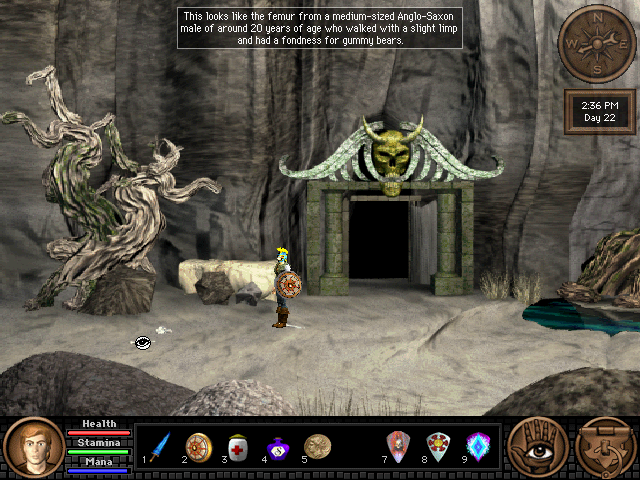 A few tidbits straight from the creators of QFG via their Twitch channel, the original QFG5 website, and other nuggets dug up across the internet:

QFG3 and QFG4 have received new fan-made patches in the past few years (in addition to the indispensable NewRisingSun patch), and QFG5 has also received its own new patch for Windows. According to the notes, it fixes a number of bugs (especially for non-English versions of the game), plus it fixes some issues when playing through the game as either Elsa or Magnum Opus, who were playable characters in the demo, but were only NPCs in the final game.

Speaking of Elsa and Magnum Opus, when I was digging through my Mac to look at all of my QFG5 saves and determine how many times I've completed this game (at least 8), I found some Elsa and Magnum saves dated November 28, 1999. These are likely hacked saved games to play as either Elsa or Magnum as each of the four classes. There were plans to allow for multi-player capabilities, and between the patch and these save games, it should be possible to play through the game as one of these others characters.